Analogy Series Part 2
“You can run,” Dorian said in a neutral tone that did nothing to lessen the intensity of his
expression, “but sooner or later, you run out of places to run to.”
― Nalini Singh, Play of Passion
Running away from your problems might seem to be the easiest thing for you to do. But then you should know no one can run forever. Problems don’t go away just because you are running faster and faster. They will still follow you.
There’s never an end to running away. You can keep on running thinking that you will evade the problems but the path is never ending making the journey as monotonous as the path which you have chosen.
You see a problem from the horizon and you take off before even acknowledging what you are keeping at stake. All that running away gives you is a false sense of security. And that’s what they crave for.. Safety. But you forget that the key word is ‘false’.
Some people have the tendency to pack all their belongings and hit the road. They watch the colors change and the towns fade by and assume that their problems will fade too. Alas! That never happens. The problem invariably finds them, sometimes quicker than they ever thought.
The prospect of facing the problems head on is too scary for them to even consider staying back. All they have ever known is running.
Don’t take running in the literal sense of the word. At times avoiding confronting a situation is as good as running away from it. Not sitting down on the table for a talk or never facing the demons you have. All these actions are different variants of running away from things which hurt you the most.
You all must have heard of the famous android game temple run. Most of you have either heard about it , played it or have heard your friends rave about their high scores.
The game is quite straightforward. There aren’t any rules per se. You just have to stick to the path and beware of the minor hurdles like bends and tree trunks on the way. And then there are some perks like immunity and faster speed and of cource the gold coins. So  all you really have to do is run. Did I forget to mention run from who? Oh yes… there are a bunch of ghouls up your ass who are ready to chew you alive.
You all must be thinking I have lost my mind explaining temple run to you all. Well, maybe I have but just a little patience.
You must have noticed that the higher you score and more the distance you travel faster the virtual you run. But the main point of my explaining all this was that; the path never ends. Either you trip and those ghouls eat you or you fall off the cliff into the sea. The path itself is never ending. 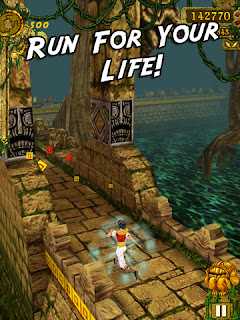 This is exactly what our life becomes like. There isn’t an end to running. You can keep on running forever. In that case, the forever will be either till your problems catch you or till you die running. Never pausing to watch how beautiful life is in either case.
You forever be in the fear of being caught. Or you might just trip.
Face it friends. Face your problems with your head held high. There isn’t any running from life. Rather there is no life if you keep on running. Why live in fear?
One thing is for certain.
If you run once you will always run but if you stand up and face it that’s just one time challenge.
So what’s your pick?
A lifetime of running or one time of facing your fears?
Life Philosophy Temple Run