Here is what Wikipedia has to say about confessions:

“A confession is a statement made by a person acknowledging some personal fact that the person would not prefer to keep hidden. The term is generally associated with an admission of a moral or legal wrong.”
Confession pages are a rage these days. Every college, school, tuition center, even offices have their own confession pages. I’m not going to talk about them being a boon or a bane because no matter what, they are a source of entertainment for sure. Or are they?
These pages have got me thinking about us humans.
Firstly, it’s crazy how people will speak out their mind when they know that their identities will be hidden.
I remember reading a quote somewhere that said people will only speak the truth when they have a mask on their face. And these confession pages prove this bang on.
If you have a grudge against someone, defame them.
If you love someone, admit it.
It you admire someone, compliment them.
If you want to vent out your frustration, type out a confession. 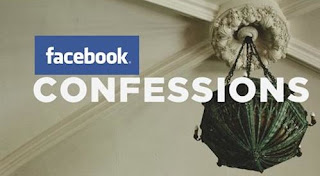 It’s pure genius. Whomsoevers' brain child this is, I salute you.And the success rate of these pages is the sure indication of the psychology of people that when shrouded they can be mean or vindictive, courageous or sadistic, lovers or haters.
Every facet of human beings is revealed. Every emotion is on display. It’s a treat for someone who loves reading people. Some confessions are no less than a soap opera.
And the second thing one must wonder is WHY?
Why are they such a success?
Why do people show their true colors on these pages only?
Personally speaking, if I have a problem with someone I’d prefer speaking it out rather than confessing on these pages.No grudge has ever been resolved by staying in the shadows and speaking your mind to the ghosts. You have to come out in the open.
But why anonymously? 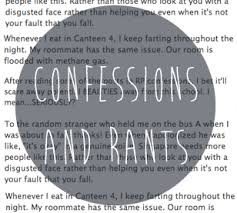 What are you scared of? Just go out in the open and speak out your mind.
If you have problem with your friend, then confessing about it isn’t going to help, right? Rather, talk to her about it. Defaming her in front of the world isn’t going to bring anyone peace. And don’t be shocked if you are bleeding guilt after that.
There are so many ‘troll’ pictures on Facebook regarding these confession pages and at times you can’t help but wish there was a button to like the picture ‘n’ number of times just to show how much you agree with it.
To top it all, people are setting dates on these confession pages.

“Hey this is for that girl who I was staring at in maths class. I have a huge crush on you. I’ll be wearing a black shirt, you wear a red top.Meet me in front of the cafeteria, under the pink umbrella, behind the pillar. I will be waiting for you.”

Wow! What happened to the old fashioned way of going up to a girl and asking her out?
Well, I certainly miss those days now. I know half of the guys out there will be scared to approach a girl for the fear of rejection but come-on guys, buck up. Believe me girls like you approaching them rather than these cheap stunts on Facebook.
And no, I’m not being sexist. Same goes for girls too. What happened to those times when there would be ‘group giggling’ when your crush approached you and you would send a girlfriend of yours to tell the guy you like him?
No way can these pages replace all that.
Even the haters … Please create a scene in the college campus instead of on confession pages. It’s much more satisfying and courageous rather than hiding behind those anonymous posts. Not to mention that its a lot more entertaining too. Either way the person knows who you are.
Well, all I mean to say is that these confession pages tell exactly what’s wrong in today’s world and that it’s becoming worse. Come on!!
We don’t even have the guts to approach our future partner for a date?
Or have we really become this lazy that we don’t even want to talk to a person to sort out our differences?
Has technology really taken over our lives to this extent?
Think about it friends.
If the answer is yes… then we should brace ourselves for a sad and a boring world.